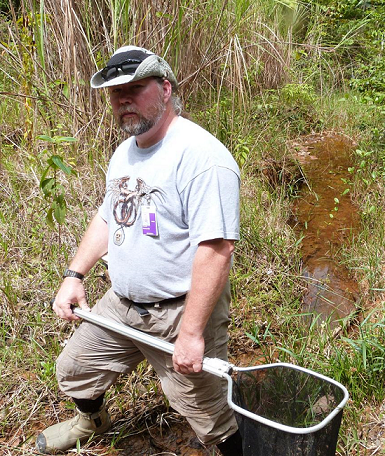 Ever since I was young, I can remember there always being at least one aquarium in the house. When I was around 10, my uncle was keeping and breeding show guppies in several aquariums. That was my first real exposure to breeding tropical fish and it snowballed from there. Also, during this time I also developed a liking for exploring the local streams and ponds in search of whatever “critters” I could find. I think you know where this is heading…..!

Fast-forward about 15 years to 1984…. I am now in the U.S. Navy stationed in San Diego, CA and I get my first introduction to the killifish hobby, at a local killifish show at the exhibition halls at Balboa Park. I was in awe of just about every fish I saw and I had to find out more. I contacted the local San Diego club as advertised at the show and attended my first killifish meeting. However, this was to be a short foray into the killie hobby since family and military obligations took precedence.

After some life changes and a military transfer to Jacksonville, FL in 1992, I once again started looking for killifish contacts. By chance I was referred to and contacted Mark Rodriguez in Tampa, FL. I made the trip to his house and after he showed me around his “fish room” (actually in his living room) we spoke for a few hours about killies. I left there with several pairs of killies (blue gularis and others), as well as contact information for the AKA. At this time, I also renewed my love for tromping through the waterways in search of my own “wild fish”.

Currently, I maintain approximately 300 tanks, in which I maintain and breed approximately 140 species/locations – mostly filled with my favorite killies, of the genus Rivulus, of which I maintain about 110 species/locations – many of which I have collected myself. I still enjoy going on collecting trips, most notably trips to Panama in 2006, 2009 and 2012, and Colombia in 2015. During these trips I have been privileged to be a part of a group of dedicated hobbyists assisting the Smithsonian Tropical Research Institute (STRI) with a research project to determine the geographic ranges of several Rivulus species as well as a few livebearer species. I have also been privileged to assist several scientific institutions by providing living and preserved samples for genetic research. I have had the honor of being invited to speak on my favorite genus at several local club shows and have been a speaker at several AKA national conventions. I am a former chairman of the Rivulus sub-committee of the AKA’s Killifish Conservation Committee and a former chairman of the Rivulus Maintenance Committee. I am a current member of the DKG Rivulus Study Group and I have been honored by the AKA as Killifish Hobbyist of the Year for 2000.

The Oldest National Tropical Fish Organization in the World